If you’re looking to get out on the water this year, you need to know about the Vibe Sea Ghost 130. It’s a high-quality angler kayak built for long fishing trips on rivers, lakes, or ocean waters. It has an extra-wide 33’ hull that offers better stability and a surface to stand on during casting. Plus, it has a spot for storage too!

The Sea Ghost is packed with features not found standard in most kayaks, including a foot-controlled rudder. The built-in rudder gives you great maneuverability and helps improve tracking in choppy waters.

In this complete review, we will talk about the best features of the Vibe Sea Ghost 130, break down its pros and cons, check out the competition, and see what other customers are saying about it. 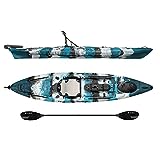 The Vibe Sea Ghost 130 is the perfect kayak for an all-day fishing trip with its ultra-comfortable Vibe Hero seat. It Vibe Hero Seat was designed with pressure-releasing padding that takes the discomfort out of long days on the water.

The Vibe Hero seat has two positions that you can adjust between, high and low. The high position is good for looking out over the water while waiting for a bite and gives you better reach and stability. The lower position is best suited for when paddling, keeping you closer to the water while preventing back strain.

The foot-controlled rudder stands out as one of the best features of the Vibe Sea Ghost 130. It adds exceptional maneuverability, which is especially useful in choppy waters that can be difficult to paddle through.

The foot-controlled rudder is fully adjustable and can be used during travel or when fishing in rough conditions. Putting down the rudder adds to the Sea Ghost 130’s excellent tracking ability, without having to sacrifice maneuverability. It also keeps the boat from rocking when you’re reeling in a particularly difficult catch.

The Vibe Sea Ghost 130 is a 13-foot long kayak made from a single piece of rotomolded high-density polyethylene.  Weighing in at only 75 pounds, it is easy for one person to carry in or out of the water using the 4 carrying handles.

With a 33-inch wide hull, the Sea Ghost 130 offers an incredible stability no matter what kind of water you’re out on. This is vitally important for a fishing kayak, as an unstable craft might flip over in rough conditions. You can be sure that the Sea Ghost 130 will stay upright whether you’re on a river, lake, or out on the ocean.

The extra-wide hull of the Vibe Sea Ghost 130 provides you with more than enough space to store everything you need for your fishing trip. On the kayak, you’ll find 2 sealed hatches with bag inserts, a rear tank, a large center console, gear racks, and two tackle tray holders.

The hatches are a great place to store your gear, while the center console has more than enough room to store food or other supplies for longer trips. It also has a built-in cup holder so you don’t have to worry about drinks spilling into your lap.

The Vibe Sea Ghost 130 has a large tank well that has plenty of room for all of the fish you catch throughout your trip. The tank is located behind the seat so that it can be easily accessed to store your catch without it slipping from your grip. The extra-large tank allows you to catch more fish before having to transfer them offshore.

Built for longer trips, the Vibe Sea Ghost 130 is equipped with places to store all your gear. Along with the 2 flush-mount rod holders, the Sea Ghost 130 has an additional four gear racks for your equipment. The racks can be used for additional rods, reels, lines, and more.

It also has a special fish finder port where you can mount GPS-enabled technologies to find the best fishing spots. For the included paddles, the Sea Ghost 130 has 2-bungee paddle parks located on the sides, as well as a fast-access paddle park on the bow. With all this extra space for gear, you’ll don’t have to worry about needing to head back to shore early.

The Vibe Sea Ghost 130 comes with two Vibe Journey Paddle, made with a polypropylene blade and a durable anodized aluminum shaft. Its asymmetric blades easily cut through the water for a smoother stroke.

The snap button allows you to adjust the two-piece paddle to change the angle of the blade for better control and maneuverability. While it lacks many of the features of a premium paddle, it is a great paddle and can always be used as a spare if you decide to upgrade.

The Ascend 12R Sport Sit-On Kayak has a unique hybrid design between a stand-up paddleboard and a sit-on-top kayak. It has a 31-inch wide hull and measures a little less than 12 feet in length. The Ascend 12R comes loaded with plenty of storage space, including two bungee cargo areas, four-rod holders, accessory rails, and an open-top deck storage room.

The Ascend beats out the Sea Ghost 130 in a few categories. The unique design allows users to get a better vantage point than they would with the Sea Ghost 130, which sinks lower into the water. It also has a flexible seating with 360-degree swivel capabilities that allow you to cast lines out from any direction.

Built for difficult conditions, the Jackson Coosa is the ultimate angler kayak for river fishing. The Coosa’s hull is built longer than the Sea Ghost at 17 feet, giving it added maneuverability that is best suited for choppy waters. It also has plenty of storage for all your equipment and a large tank well behind the seat.

The Jackson Coosa performs much better than the Vibe Sea Ghost 130 when it comes to fishing in rough conditions. This is due to its unique rocker design, which gives it extreme maneuverability. It also takes care of many comfort issues with a wider standing platform and an adjustable high/low seat with lumbar support. It also has a drag chain that can be deployed to act as an anchor or can be used to slow the craft down.

The Coosa is not a boat that is meant for the ocean and will perform poorly in open water. Its long frame and curved rocker shape cause the Coosa to track poorly, making it difficult to keep steady when reeling in fish. It is also susceptible to wind, and can easily be difficult to control when caught up in a gust.

The Vibe Sea Ghost 130 scores high on many online reviews. Customers praise the high stability and premium features, and most agree that it sells at a fair price.

Many say they are able to take their Sea Ghost 130 on long fishing trips in any type of condition and are able to cast while sitting or standing. However, some customers say they have difficulty finding the proper balance to stand up, especially if they are taller.

Is the Vibe Sea Ghost 130 Right for You?

The Vibe Sea Ghost 130 is a large, versatile fishing kayak that can be used by both professional and beginner anglers. It is a lightweight craft that can be easily maneuvered in the water, without having to sacrifice tracking or speed.

The Sea Ghost 130 can withstand almost every type of water environment, and the built-in rudder can be used to help keep the craft stable no matter where you’re fishing. The extra storage makes it a great boat for long fishing trips, or for when you just want to get out on the water and enjoy nature.