The Ocean Kayak Prowler 13 is a fishing kayak that offers a perfect balance between speed, stability, and maneuverability. Its V-shaped polyethylene hull easily cuts through choppy water, making it suitable for nearly all types of water types and weather conditions. It also has a plethora of storage options, so there’s room for all of your equipment and anything else you may need for your trip.

The Ocean Kayak Prowler 13 has a V-shaped hull that is ergonomically designed to allow the rider to glide through any type of water. At only 28 inches wide by 13 feet inches long, the Prowler 13 is a bit narrower than most fishing kayaks.

The narrow V-shape allows the hull to easily cut through the water, which helps improve tracking. V-shaped hulls are also known for their speed and secondary stability. 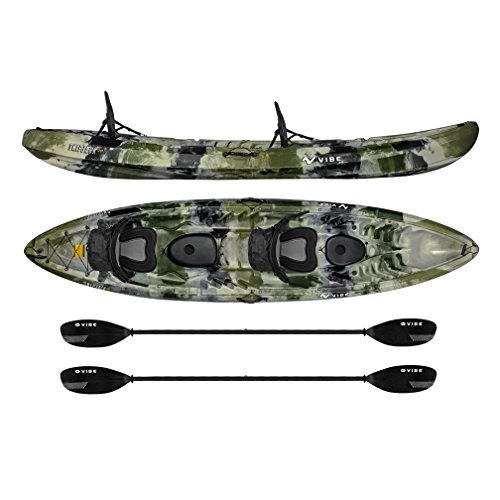 The Ocean Kayak Prowler 13 is made with a single layer of lightweight polyethylene material and weighs in at 54 pounds.

Polyethylene is one of the strongest materials used to build kayaks, making it highly resistant to wear and tear. Any scratches can be easily repaired with little effect to the boat’s performance or appearance. The Ocean Kayak Prowler 13 has three polyethylene color options including blue camo, brown camo, and lime camo.

Some of the best features of the Ocean Kayak Prowler 13 are the versatile storage options. There is a large storage hatch at the bow of the craft with a Click Seal lock, which allows you to keep gear dry with a watertight seal.

Just in front of the seat is another hatch with a storage bucket, which can be used to store valuables or extra equipment.

There is also space near the tank well with bungee cords that can be used to store a cooler or tackle box. There are also paddle holders on each side, as well as two flush-mounted rod holders and a cup holder.

Finally, there is a bungee rig that runs along the deck of the boat, which can be used to store equipment or clipping dry bags. With a total capacity of 450 pounds, the Ocean Kayak Prowler 13 has more than enough room for everything you need for your trip on the water.

The Ocean Kayak 13 has a special port built especially for fish finder rigs.

Fishfinders are small GPS-enabled devices that can be used to find the best fishing areas. They use sonar technologies to search the water for high concentrations of fish, leading you to the spots where you’ll get the best catches of the day.

Many fish finders can also keep track of things such as navigation, speed, and the depth of the water you’re on.

The tank well is a storage area on a kayak that is most often used to store a fisherman or woman’s daily catch. The tank well on the Ocean Kayak Prowler 13 sits behind the seat, making it easy to transfer fish from the line to the tank. It has a large capacity, meaning you can be out on the water for longer without having to worry about running out of space.

The Prowler 13’s tank well is also equipped with several crossing bungee cords, which can be used to store a cooler or tackle box. With the Ocean Kayak Prowler 13, everything that you need for a full day of fishing is right at your fingertips.

The Ocean Kayak Prowler 13 is a one-seater SOT kayak with a molded-in seat well and the Comfort Plus padded nylon seat.

The Comfort Plus seat has extra padding on the bottom and was designed to keep the rider secure and comfortable in rough waters.

The seat has four different adjustment levels and is designed so that all storage areas are within easy reach. The seat is positioned higher than some other angler kayaks on the market, giving you supreme visibility of the surrounding area.

Comfort is one of the most important things to keep in mind while picking out a kayak, as long hours on the water can cause considerable strain. Ocean Kayak kept this in mind when constructing the Prowler 13 to design a craft that allows the captain to ride comfortably.

Instead of footpegs, the Prowler 13 features molded-in footwells that can accommodate riders of all sizes.

While kayaks like the Ocean Kayak Prowler 13 are built to be durable, they are still susceptible to wear and tear. This is especially true during transport, as kayaks can be easily scratched or dented when dragged on rough surfaces. To combat this, Ocean Kayak fitted the Prowler 13 with pre-installed skid plates to protect the hull.

Skid plates are small pieces of plastic that attach to the hull of your kayak. This acts as a buffer between your kayak and anything that threatens to damage it. Skid plates are easily replaceable and are a great way to keep your kayak at peak performance.

The Ocean Kayak Prowler 13 has all of the right features and benefits of a great beginner kayak. It is lightweight, stable, and has plenty of room to store everything you need.

It has the perfect balance between speed and maneuverability for those who are just starting out. Besides fishing, the Prowler 13 can also be used for recreational paddle trips, or make a great hunting craft.

Suitable for All Waters

Whether you’re out on the lake on a clear day, or paddling through a rock-heavy stream, the Ocean Kayak Prowler 13 will give you superior performance.

There’s no worry about the kayak tipping over while out on the water, as its V-shaped hull can easily cut through choppy waters.

A kayak needs good tracking in order to stay on course and keep the craft straight when reeling in catches.

The Ocean Kayak Prowler 13 has a specially designed hull that maximizes tracking while not sacrificing too much in maneuverability.

The tracking can be improved even more by attaching a rudder to the stern.

Stability is extremely important in a kayak, as it helps keep the craft upright and makes it more suitable for rough waters.

Even though it is narrower than many fishing kayaks, the Ocean Kayak Prowler 13 has stability that can match many of the wider models.

Once you’re out on the water, it can be a pain to have to go back to shore just because you don’t have the right equipment. Ocean Kayak aims to solve this issue by providing the Prowler 13 with lots of storage options.

With the multiple storage hatches, large tank well, two-rod holders, and bungee attachments, the Prowler 13 have more than enough space to pack everything you need and more.

The Ocean Kayak Prowler 13 is lightweight despite being made with polyethylene, which is typically heavier than other kayak materials. At just 54 pounds, the Prowler 13 is one of the lightest polyethylene kayak models currently on the market.

Ocean Kayak kept comfort in mind for the Prowler 13 with the inclusion of the Comfort Plus seat and the molded footwells. The combination of the two make for seating that can be easily adjusted for any rider.

The Ocean Kayak Prowler 13 is slower than many of the other V-shaped models on the market today. This may not necessarily be considered a problem, as the Prowler 13 makes up for the lack of speed with superior stability.

Not Good for Long Trips

While the Comfort Plus seat does offer great back support, the lack of extra padding on the lower portion can cause discomfort on long trips.

We recommended getting an extra pad for the seat if you’re looking to take the Ocean Kayak Prowler 13 out all day.

One of the biggest complaints of the Ocean Kayak Prowler 13 is that it can take on a big of water during use. Although it has scupper holes and water drains, many say that pools of water can form, especially in the footwells.

The Ocean Kayak Prowler 13 comes only with the kayak, so you will have to spend more if you need any accessories. This can be frustrating for a beginner, who will likely need to sell out more money for things like paddles, rudders, and scupper plugs. 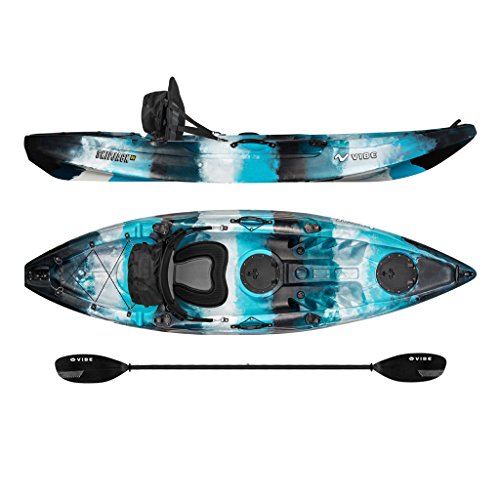 It has a lot of room for equipment storage and is built extra-wide for more room and improved stability. The extra width of the Sea Ghost 130 puts the craft at 75 pounds, so it may be a bit more difficult to transport than the Ocean Kayak Prowler 13.

The Perception Pescador Pro 120 is a fishing kayak engineered for flat-water areas.

Despite being one inch shorter than the Ocean Kayak Prowler 13, the Pescador Pro 120 still has more than enough room to store all of your equipment.

It has an adjustable mesh seat and footrests that provide maximum comfort. The smaller size does not mean a smaller weight, as the Pescador Pro 120 is still heavier than the Ocean Kayak Prowler 13 at 64 pounds.

The Ocean Kayak Prowler 13 is a popular kayak among anglers and hunters, enough that it has earned a rating of 4.4 out of 5 on Paddling.com.

Customers that have used the Ocean Kayak Prowler 13 praise the boat for its stability, storage space, and good tracking. Many say that it is suitable for rough waters, as it easily glides over rocks or heavy weeds.

Numerous reviews state that it is easy to paddle and turns well for a kayak of its size. Some say they are able to stand on this kayak with no issues, while others say they have difficulty keeping their balance while trying to stand.

Some customers complain that the boat is not as fast as the competition, but note the Ocean Kayak Prowler 13 makes up for this with better stability and tracking. Many point out that the kayak can take on a lot of water, especially when controlled by larger individuals. Others criticize the Ocean Kayak Prowler’s lack of padding on the back of the seat, making it a bit uncomfortable during longer trips.

Is the Ocean Kayak Prowler 13 Right for You?