​Hurricane kayaks include a variety of water worth vessels. The company has been around since 2011 and has grown considerably in its offerings.

Originally focused on recreational kayaks, their lines now include sit-on-top kayaks, fishing kayaks, day and touring kayaks. Each one fills a different purpose, so no matter what you’re looking for, you’re probably going to find it at Hurricane.

To help you understand the variety you have to choose from, we’re going to go through a few reviews we found that cover each type of Hurricane kayak, so you know the differences, too.

​​Adventure Kayak Magazine took a look at the Santee 110 Sport kayak from Hurricane, and there is a video that you can watch from one of their experienced paddlers.

The kayak weighs in at thirty-three pounds and is only eleven feet long. The size and weight make it perfect if you’re going solo out on the lake because you can easily handle the kayak on your own. It’s also sleek enough for you to keep up with friends if you want to go on a group trip down the river.

It comes with a removable seat, too, which allows you to transport the kayak easily when you pull the seat out. The onboard storage place also provides you with plenty of room to store your gear. 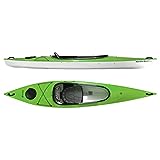 Over at Paddling.com, you’ll see many different reviews from customers that have used this kayak as their primary mode of watery transportation. The general consensus is that they love it.

One reviewer, Agentilis, wrote, “I have had my Santee 116 for at least 5 years. I bought it when there were fewer lightweight kayaks on the market. As a smaller woman have liked the weight of it. My only complaint is that it doesn’t track as well as I would like.  Have put it on and off my vehicle numerous times, even in a single day, and had it drop accidentally more than once and it hasn’t broken.”

Another reviewer, Wallacmi, purchased the 116 as their very first kayak. “The Santee 116 is my first Kayak. I purchased it at the recommendation of a friend. Iw as a little bit skeptical of a kayak that weighed less than 40lbs but I fell in love with the fit and finish and the light weight was a plus. I couldn’t be more pleased.”

Sit-on-Top Kayaks from Hurricane are the most versatile kayaks that they carry. You can use these on the ocean, do some wave riding, as well as just to have some fun out on the water. They are lightweight and are great for the occasional fishing trip.

If a fishing kayak is what you’re after, you’re going to want to pay special attention to the SweetWater 126 and the Skimmer 120 Propel. These two have some extras that make them wonderful kayaks to take out for a day of fishing. 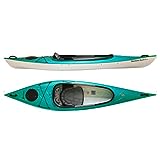 One of the reviews that we came across was written by Steve Pearson, avid paddler and kayak enthusiast. He mentioned that the Skimmer 116 is perfect for people that are looking for lightweight kayaks and don’t plan on doing anything more than flat water. If you happen to be over 220 pounds or taller than 6’1”, then you’re going to want to find something else. 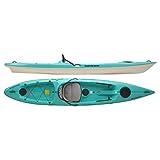 You can find reviews for the Skimmer 128 over at ProductReview.com as well as Paddling.com. Wherever you look, you’ll be happy to know that most of the things people say about the Skimmer 128 indicate that they are satisfied with their kayak.

One review from Occy in Sydney, Australia states, “I have to say this latest piece of plastic from Hurricane certainly lives up to those claims. It ticked all my boxes. Not only is it a serious high performance machine, but it is one of the most beautiful kayaks I’ve ever laid eyes on, especially in the limited-edition silver of my test yak.”

The reviewer goes on to say that the Skimmer 128 handles well in the water as it skims the surface as opposed to aggressively plowing through the water. It powers through swells and mild choppy water without any issues. 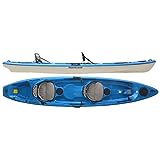 Canoe & Kayak Magazine tested out the Skimmer 140, and they had a lot to say in favor of this Hurricane kayak. At just over fifty pounds, the Skimmer 140 is also the longest of the kayaks in the line. There is, however, plenty of storage to hold up to two medium and two large dry bags in the hatch with extra room to spare.

Overall, they claim that the Skimmer 140 handles well on the water, although for a smaller paddler, it might have some difficulty in the wind. One downside to this kayak is the lack of adjustability on the seat. Once you’re there, you’re in the seat, and you can’t adjust it to fit you any differently.

They suggest adding some weight up in the front hatch to compensate if you’re struggling to keep it from turning in the wind.

When you start searching for fishing options among the Hurricane kayaks, the Skimmer 120 Propel is an excellent option. Yak Outlaws reviewed them, too, and have some great things to say about it.

This kayak is different because it allows you entirely hands-free cruising due to the Propel Pedal Drive system that is integrated into this kayak. The pedal power is ideal when you’re fishing because your hands will be completely free to cast your reel as needed.

The seating is also comfortable and entirely adjustable so you can be sure you’ll be comfortable on an all-day fishing trip. The kayak weighs in at 55 pounds and has a weight capacity of 350 pounds which means it will hold larger paddlers in addition to all of their necessary gear.

​​The SweetWater 126 is one of the newest additions to the fishing and sit-on-top kayak lines in Hurricane Kayaks. Over at Adventure Kayak Magazine, you can watch a video from someone who reviewed the 126 and had lots of praise to give this kayak.

The hull design is excellent when it comes to stability and overall performance on the water. With its 1st Class Frame Seat, you can rest assured that the kayak is equipped for a day out on the water. You can also choose an optional rudder if you’d like.

​According to Hurricane, the Day Touring Series of kayaks consists of their Sojourn line. It is a kayak that is perfect for paddlers of any experience from beginners to more advanced. Made of a light thermoform, they are as pleasing to the eye as they are functional. 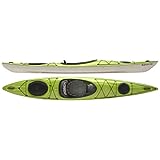 The folks over at Paddling.com have plenty to say about the Sojourn 126 kayak. At 12.5 feet long and just over 40 pounds, it’s a good size that will hold plenty of gear.

One reviewer, in particular, says “I bought this kayak 2 years ago. It was my first kayak purchase. I an petite and middle aged so I was looking for a lighter weight, smaller kayak that I could carry and lift onto my far.”

She goes on to say that she is a lake paddler and wanted a kayak that would carry her camping gear. With the Sojourn 126, she got exactly what she was looking for and would be happy to purchase another one of the Hurricane kayaks at some point in the future. 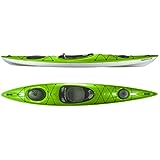 Adventure Kayak Magazine also has a review on the Sojourn 135. When looking at the hatches, they agree that the storage space is plentiful for larger gear as well as plenty of snacks.

The shape of the kayak also means minimal rocking, excellent tracking, and plenty of stability. You do, however, need to be conscious of how your weight is distributed in the kayak to ensure good turns as well as sharp edging.

The seat is comfortable with the supportive backrest and proper ventilation all around. Weighing in at 45 pounds, it is made of the same ABS plastic the rest of the Sojourn series.

Canoe & Kayak Magazine reviewed the Sojourn 146 LV and had plenty of positive things to say about it. According to them, the hull looks like fiberglass although it is actually an ABS plastic that makes this kayak a lightweight option.

The kayak also has plenty of storage for your dry bags. The seat is comfortable, too, that is also adjustable for your comfort. Seat ventilation also ensures cooling on a hot day out on the water.

Performance is fantastic, and the Sojourn has “a nice glide to it” thanks to the hull design. Stable enough for someone brand new to kayaks and more advanced for someone who likes to turn quickly. The adjustable foot braces can also be adjusted from inside the kayak.

As you can see, there are many different kayaks to choose from depending on what you’re looking for. In fact, you should probably decide if you want a sit-in like the recreational and touring kayaks or a sit-on-top like those in the Skimmer line.

There are so many other reviews on each of these that it is recommended you take some time and out to read over what you can find, so you make the right decision when the time comes to take the plunge.